The development of the Nordic Total Merit index (NTM) for dairy cows is the story of moving towards a more holistic and balanced breeding goal. It includes all the most economically important traits that are currently possible. NTM includes many functional traits such as udder health, fertility and longevity. Even though these traits have an unfavorable correlation to yield, it has been possible to achieve genetic progress simultaneously for both yield and functional traits. 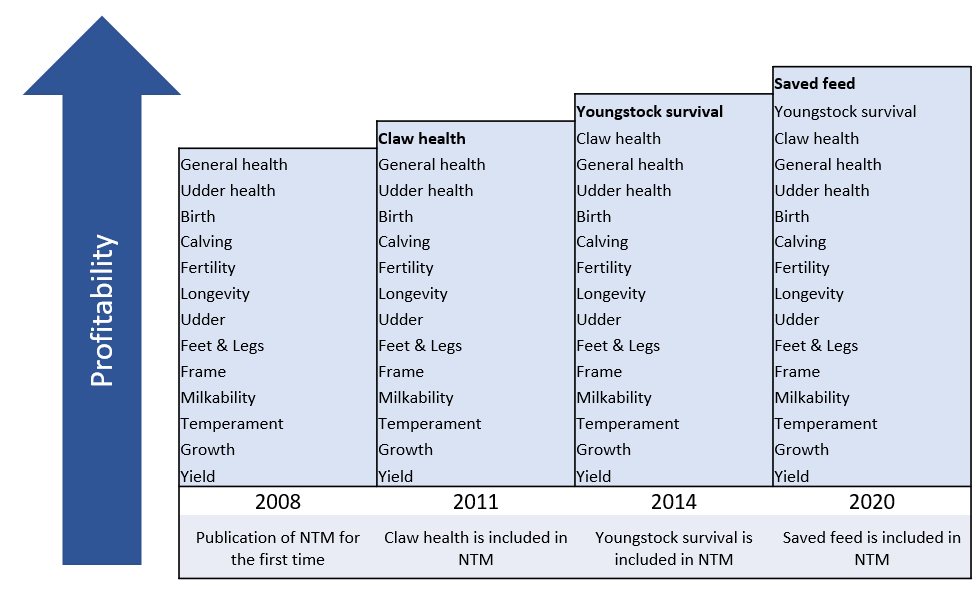 NTM was first published in 2008. Prior to this similar national total merit indices were used in Denmark, Finland and Sweden. During the years, more traits have been added to NTM. This has enhanced the economic value per NTM unit.

The increased emphasis on the functional traits in NTM goes well in line with farmer preferences. There has been an increasing focus on breeding towards a more robust cow that gives a larger profit, not only by increasing the milk yield, but especially by decreasing the production costs.

The creation of NTM is a farmer-driven process that aims to combine the traits in an optimal way to achieve best profit. The relative economic weight of each trait in NTM is based on expectations of future market prices and production circumstances. Thus, the breeding goal reflects the farmers’ current and future needs.

Application of the newest calculation methods and chip technology ensures the highest possible genetic progress for all traits in NTM. The use of genomic selection has enhanced the possibilities to breed for more profitable cows. This is due to increased reliabilities, especially for the functional traits. Hand in hand with the increased reliabilities is an increase in the genetic progress for all traits.